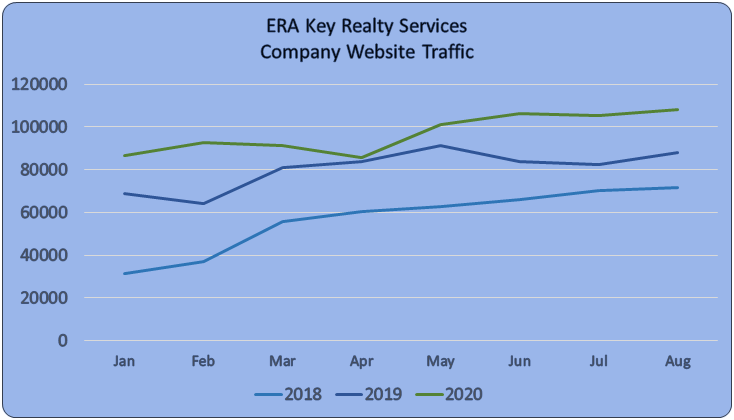 As the chart above shows, traffic on ERA Key’s website has been building steadily and now exceeds 100,000 visits per month. Traffic has grown nearly 20% in the past year and about 35% over the past two years.

“While the personal touch continues to be important in the real estate industry, digital marketing has become an essential part of the home-buying process,” according to ERA Key President Cheryl Eidinger-Taylor. “We have been consistently adding to our online efforts and that is paying off with an increase in website traffic.”

By far, the largest percentage of home buyers begin looking for a home by searching for properties online, according to the National Association of Realtors. The NAR found that 93% of home buyers search websites to look at property and 73% use a mobile device in their search for a home; 86% use real estate agents and 53% attend open houses, according to the 2019 survey.

“While the initial process may start online,” according to the NAR, “home buyers turn to the advice from a trusted real estate agent. The difference is that home buyers are entering the process more educated about the market before they speak to a home seller or an agent.” 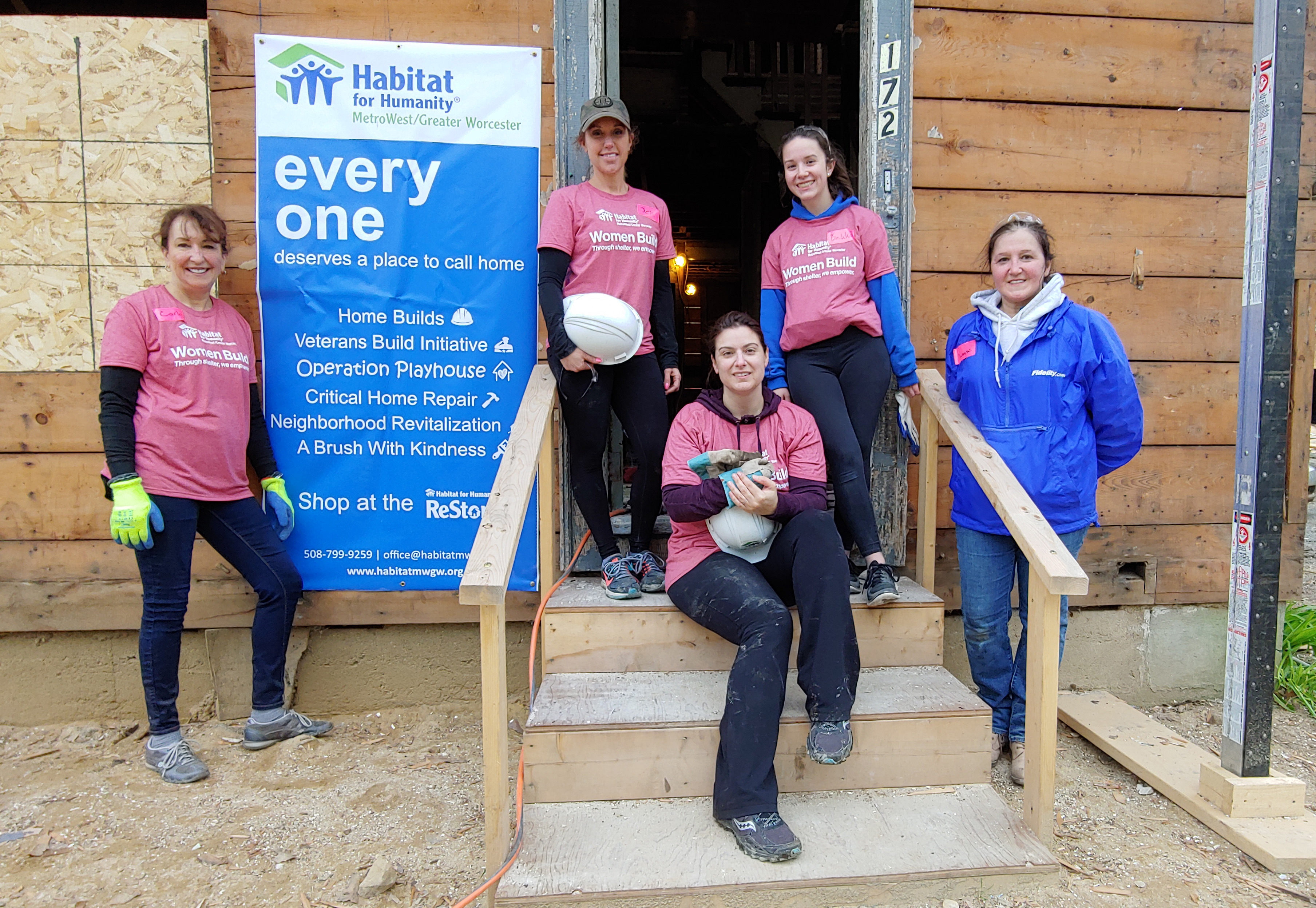 Realtors and staff at ERA Key Realty Services are setting up teams to participate in this year’s Habitat Walk for Homes, which will take place Sept. 9 - 30, 2020.

Participants in the virtual walk are being challenged to walk 52 miles over the 21 day period. Participants are encouraged to raise at least $300 each. 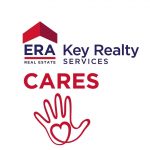 ERA Key is a long-timer supporter of Habitat for Humanity, as our core values include giving back to the community.

“As a leading real estate agency, ERA Key and its agents understand the importance of home ownership,” said President and Chief Operating Officer Cheryl Eidinger-Taylor. “We take pride in contributing to the community by helping Habitat for Humanity achieve its vision is of a world where everyone has a decent place to live.”

You can register or donate here, and a “how to” guide is available here.

The photo above is from a renovation project that ERA Key participated in last year.

“Our high ranking is an amazing accomplishment when you consider that we are competing against agencies in the Boston market and other high-end markets, where homes sell for much more than they do in central Massachusetts,” said ERA Key President and Chief Operating Officer Cheryl Eidinger-Taylor. “In most of our markets, we are the top agency or very close to the top.”

Cheryl attributes ERA Key’s high ranking to the quality of its agents, the training they receive and the tools they have to help them sell real estate.

For Norfolk, Middlesex and Worcester Counties, ERA Key was #1 overall in volume. It was the #2 agency for listings taken, with 1,476, and #3 in closed sides.

The ranking does not include sales by Hunt Real Estate. Together, the combined agency had 13,243 closings with a volume of $2.79 billion.

ERA Key has 332 licensed agents and 372 employees overall in 15 offices.

ERA Key Realty Services has been named among the top places to work in the state for the fifth consecutive year, based on a survey administered by Energage for The Boston Globe.

ERA Key placed third in the large company category and was the highest ranking real estate agency in any category. The agency moved up two places from 2018, when it ranked fifth.

The Top Places to Work survey of more than 65,981 employees at 323 companies asked questions based on 24 factors, including leadership, training and the opportunity for employees to work at their full potential. Responses were anonymous.

“We believe that happy employees result in happy customers,” said President and Chief Operating Officer Cheryl Eidinger-Taylor. “We provide our agents and staff with the training they need to achieve the best results for themselves and for their customers. Everyone benefits from this approach.”

In February 2018, ERA Key merged with HUNT Real Estate ERA, the second largest brokerage firm in the ERA® network, but it maintains its separate identity.

“We merged with ERA Key because of its well-deserved reputation for being one of the top agencies in Massachusetts,” said Charles F. Hunt, executive vice president and chief operating officer, HUNT Real Estate ERA. “ERA Key is a well-run company with dedicated, hard-working agents. We’re proud of what ERA Key has accomplished and continues to achieve.”

Eidinger-Taylor said ERA Key’s approach has played a key role in the agency’s rapid growth. ERA Key now has more than 330 agents and about $740 million in annual sales.

ERA Key President and COO Cheryl Eidinger-Taylor was among the Power Brokers quoted and profiled by RISMedia in its 2019 Power Broker Report.

In real estate, accountability is a prerequisite for success. No one embraces it with more passion than Power Brokers, who empower their leaders and managers with pioneering—and often, proprietary—training.

In fact, according to RISMedia’s 2019 Power Broker Report, one of the top two areas of investment for Power Brokers is training, with coaching, education, goal-setting—even mindset—forging a path for productivity.

Growing Your Own: Power Brokers Sound Off

“We offer Lunchtime Learning Tuesdays and Tech Talk Thursdays. Friday Morning Power Hour is a weekly meeting with guest speakers on timely topics. This, along with our online academy, Institute, powered by Leading Real Estate Companies of the World®, helps us continually evolve and stay at the forefront. We have weekly WIG (Wildly Important Goal) calls with our entire support team where each person offers something that will enhance the experience for our team and clients.”

“We have a program called FIRE (Foundations in Real Estate) that runs one day a week for five weeks, and it’s a full day of covering what you don’t learn in licensing school.”

Power Brokers: As Competition Heats Up, Dollars Go to Growth

ERA Key President and COO Cheryl Eidinger-Taylor was among the Power Brokers quoted and profiled by RISMedia in its 2019 Power Broker Report.

Faced with overlapping pressures this year, Power Brokers are approaching business with a combination of fortitude, grit and wariness. 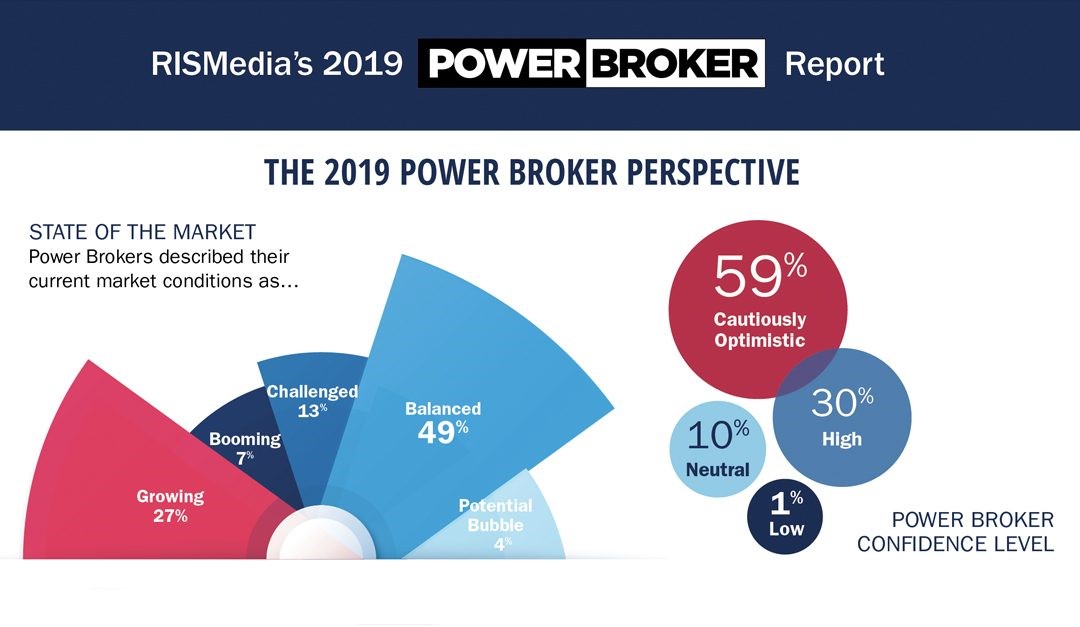 According to RISMedia’s 2019 Power Broker Report, 59 percent of Power Brokers have a “cautiously optimistic” outlook—an increase from 52 percent in 2018, and driven by economic uncertainty. As capital flows into the industry and options proliferate, the agent and consumer experience remain priorities, with Power Brokers adapting these areas to compete and, ultimately, win.

With confidence levels shifting, they are leaning into two primary strategies: expansion through mergers and new offices (the No. 5 area of expenditure for Power Brokers); and recruitment (No. 1). Notably, 45 percent of Power Brokers are focused on new offices this year.

A Careful Eye on the Future: Power Brokers Sound Off

“[Focus on] strategic planning, accountability, being consumer-centric and being completely dedicated to the success of each of your agents and in a way that provides the greatest value to the consumers and clients we serve.”

– Gino Blefari, CEO, HomeServices of America, No. 1 in transactions

“A ‘healthier’ inventory and days on market will reward those brokers and agents with sound...

HUNT Real Estate ERA of Buffalo, N.Y., the second largest brokerage firm in the ERA network, merged with ERA Key in February 2018. Both agencies kept their names and management intact.

It was the second time that ERA Key has received the Gene Francis Memorial Award, which it also earned in 2014. The annual award, named after ERA Real Estate co-founder Gene Francis, is the highest honor given to an ERA company and reflects the qualities most respected throughout the global ERA system and the real estate industry.

ERA Key closed sales totaling $759 million in 2018, making it one of the largest real estate agencies in Massachusetts. ERA Key finished fourth in Massachusetts among all agencies for listings taken (1,429), up from sixth in 2017, and sixth in closed sides (2,284), up from seventh in 2017.

“Our focus on training and technology has helped our agents continue to succeed, even as rising interest rates caused the housing market to slow somewhat nationally in 2018,” said President Cheryl Eidinger-Taylor. “Overall, inventory improved and ERA Key maintained the high level of sales we achieved in 2017.”

ERA Key has more than 350 agents working in 15 offices throughout central and eastern Massachusetts. The ERA Real Estate Network includes 36,000 brokers and sales associates throughout the United States and 31 countries and territories.

"There are hundreds of very fine real estate companies in the ERA organization with whom we collaborate,” said Peter F. Hunt, Chairman and CEO of HUNT...

ERA Key President and COO Cheryl Eidinger-Taylor was among seven women in real estate interviewed recently by RISMedia about building their business.

A considerable number of this year’s RISMedia Real Estate Newsmakers are women who are making waves in the industry, advancing their businesses and significantly contributing to their communities. What’s the secret to their success? Strategies range from a focus on mentorship and coaching to relationship marketing and community involvement. Here are their approaches and insights on how fellow women in real estate can advance their business and reach their goals:

“Being hands-on allows me to better understand and fully respect the job of each agent and employee in the enterprise. No one is more important than another. We are all equal human beings with complimenting roles all working toward a single goal: to bring our customers home,” says Blaylock.

“Put the natural self-doubt aside that we as women have and focus on if the job is the right fit for you,” adds Blaylock. “Make a sound business decision for you and your family. Obtain the input you need and then simply go for it. Remain agile in all you do and remember to respect all people, including yourself!”

“Many agencies have found it difficult to grow in this market, but we’ve had an exceptional year,” she said. The agency’s 2,385 home sales in 2017 was a 4-percent drop from the prior year. Year-to-year sales in total, however, rose by just under 3 percent.Eidinger-Taylor predicted another strong year in 2018, but the agency has very few homes listed on the market — fewer than 2,000, compared to what is typically more than 6,000, she said.

ERA Key has 15 offices in Central and Eastern Massachusetts. According to the company, it is one of the top agencies in the state and the top 10 ERA agencies in the country, based on sales and total volume.