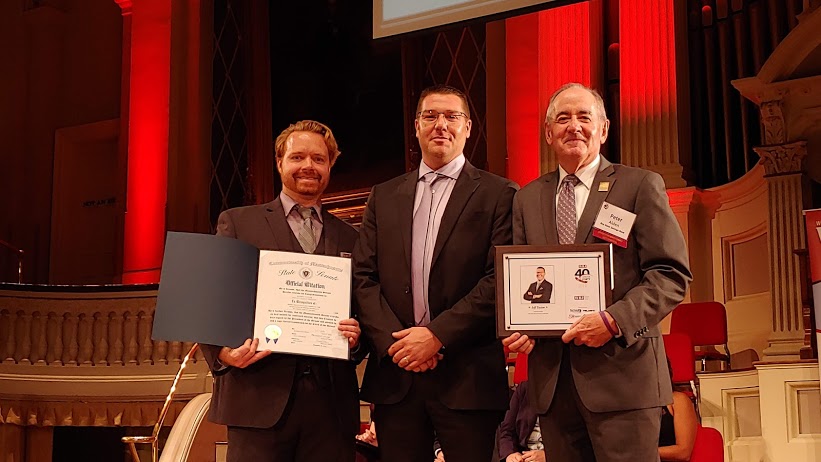 Pictured, left to right, are Brad Kane, editor of Worcester Business Journal, Jeff Taylor, and Peter Alden, president of Bay State Savings Bank, which was a sponsor of the event.

The 20th annual “40 Under Forty” “honors the rising stars and outstanding young leaders who are shaking up the Central Mass. business community and leading us into the future,” according to Worcester Business Journal.

Taylor, 38, is the second generation of Taylors to receive the award. His stepmother, Cheryl Eidinger-Taylor, who is president and chief operating officer of ERA Key, received the award in 2003. His father, Bruce Taylor, founded ERA Key.

Jeff Taylor began his career in real estate after graduating from Suffolk University with a business management degree in 2003. Taylor began his career as a real estate agent representing clients in the Worcester area. He added the role of Company Recruiter in 2005, which provided him with tremendous insight on how to best utilize the tools, support, and technology ERA Key Realty has to offer both clients and agents.

In 2010, he took over management of ERA Key’s Framingham office in addition to the Westborough office. After Distinctive Realty of Marlborough merged with ERA Key in 2011, he took on the responsibility of integrating the new Marlborough office into the ERA Key family.

He co-manages the ERA Key Foundation, which has given away nearly $400,000 to dozens of Worcester County nonprofits since its inception in 2004. Last year, the foundation benefited 27 organizations.

He is active with the LGBT Asylum Task Force of Worcester. Last year, Taylor and his husband, Brandt Molitor, provided a three-family property in Worcester to the task force to house those in need.