Agents in the Marlborough office donated $500 each to Stevie’s Back Road Cafe and Catering in Hudson, and Chill Kitchen and Bar in Marlborough to pay for meals for first responders. The  donation was featured in a recent article in The Stow Independent about the "Feed Your Neighbor" program. The article appears below. 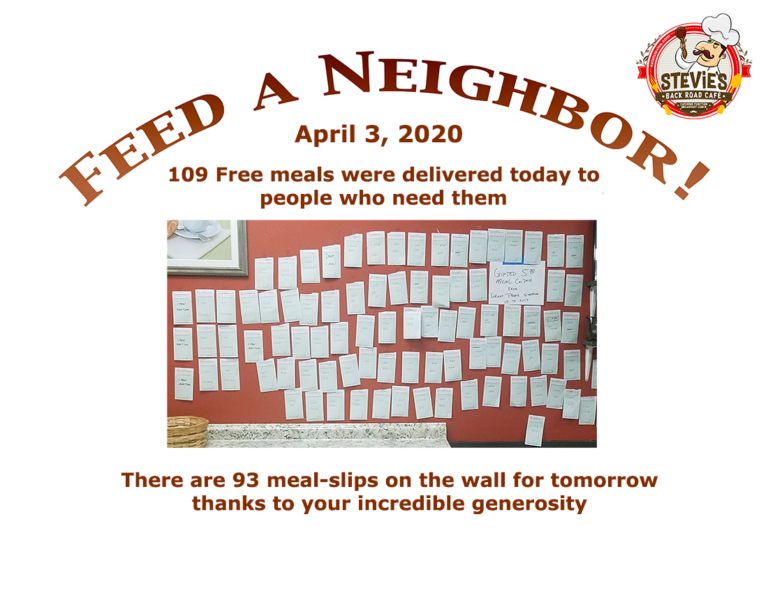 To keep the $4,000 worth of food from going to waste, Dembro started the “Feed Your Neighbor” program, hoping that $5 meals would entice a few people to do some good, and use up what he had left before shutting down. Diners could order meals for themselves or donate them for others. “I’ve lived in the Marlborough-Hudson area since 2003, and I’ve seen a lot of struggling people, and to sit there and know there was going to be more, I just had to do something,” he said.

Six weeks later, Stevie’s Back Road Cafe is busier than ever. He’s hired two new people to handle the influx of donations, orders, and well-wishers so he can continue to feed local homeless shelters, churches, and neighbors in need.

To make it work, he’s had to restructure everything about the restaurant. “To do this it was like building a restaurant again,” said Dembro. “We took our original dine-in menu and put that one aside. We had to change the kitchen, change the menu, change the procedures…literally change everything.”

For prices of $5 for adults and $3.50 for kids, customers can choose from a wide variety of American dishes, which can be picked up curbside or delivered. “There is nothing you can’t have,” said Dembro. Specials range from lobster ravioli to chop suey, chicken Marsala, and classic mac and cheese, plus the usual grab-and-go burgers, wraps, soups, and salads for lunch and breakfast. “If we don’t have it, we’ll try to make it.”

Right now, he’s focusing on making sure he can pay his employees and purchase more food to feed the neighborhood. “The only thing I’m doing right now is covering food costs and payroll,” he said. “I’ll figure [the rest] out later. This is more important right now.”

He’s been blown away by the support from everyone. “It’s astounding – people are really stepping up to the plate,” Dembro said. “Last week, I had a woman come in and put $40 on the table and ask, ‘Can you feed people with this?’ and she walked out the door. Never seen her before.”

Dembro said that the 495 Truck Center, ERA Key Realty Services, and an anonymous donor each gave $500 in the first few weeks, which allowed him to move from keeping the lights on to feeding anyone in need. “I figured some people would step up to the plate, but I never thought that someone would come in and cut me a check for $500,” said Dembro.

These kinds of generous donations have allowed him to put his military skills to good use. Said Dembro, “I served on a Navy carrier, so I know how to cook for a lot of people. This allows me to take my talents and do something I can do for the community.”

Now, anyone who needs a meal can order one from the wall of over 150 donated tickets, no questions asked. “People can come in, pull a slip off the wall, hand it to us at the counter, and we ask them what they want and we make it for them. Someone else has already paid for the meal,” said Dembro. That goes beyond helping places like Roland House or Our Father’s Table in Marlborough—Stevie’s has made deliveries to couples with newborns, seniors filling the gaps with Meals on Wheels, first responders, and frontline workers at local hospitals, all from neighbors helping neighbors.

“There’s a lot of proud people out there, people who don’t want to say that they’re struggling. The best thing you can do for them is to be a friend and call me up,” Dembro said. “You don’t have to tell me it’s for you—I don’t care about that. If you have to feed your kids, if there’s any issue, that’s why we’re here.”