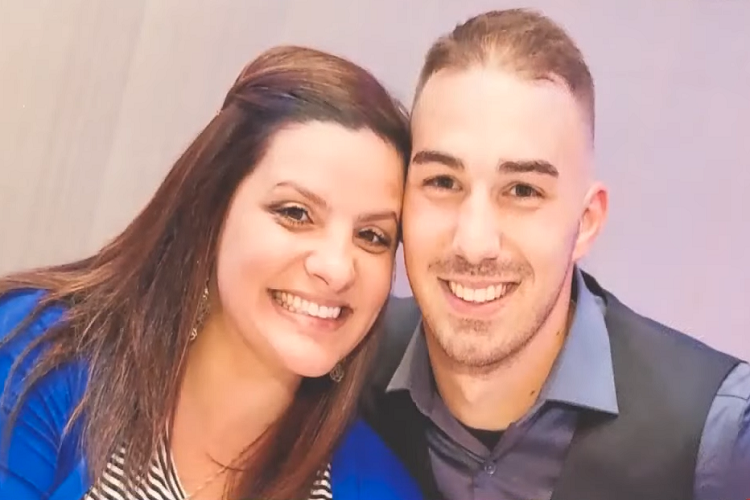 Chris Pace and his wife, Mellissa.

Pace was hospitalized with 14 broken bones, including all the ribs on his left side, and second and third degree burns on his left arm. Lt. Jason Menard, who perished in the four-alarm blaze, saved Pace’s live by pushing him out of a third-floor window of the blazing three-decker in Worcester on Nov. 13, 2019.

“Tragedy often brings out the best in a community,” said President Cheryl Eidinger-Taylor. “We’re proud to be part of a community effort that so far has raised nearly $40,000 to help Chris recover.”

The crowdfunding campaign is being managed by Helen and Lt. Scott Holt. Donations can be made at www.gofundme.com/f/worcester-firefighterchris-pace.

ERA Key Realty Services announced that agents in its Chelmsford office, One Chelmsford St., have donated $1,000 to Hidden Battles.

Hidden Battles, which is based in Lowell, helps preserve the mental health of veterans, firefighters, police officers and first responders through treatment and counseling for depression, suicidal tendencies and post-traumatic-stress disorder (PTSD).

“ERA Key contributes to dozens of non-profit organizations, but it is especially gratifying to give back to those who give so much of themselves to protect and serve us,” said President Cheryl Eidinger-Taylor.

ERA Key Realty Services has been named among the top places to work in the state for the fifth consecutive year, based on a survey administered by Energage for The Boston Globe.

ERA Key placed third in the large company category and was the highest ranking real estate agency in any category. The agency moved up two places from 2018, when it ranked fifth.

The Top Places to Work survey of more than 65,981 employees at 323 companies asked questions based on 24 factors, including leadership, training and the opportunity for employees to work at their full potential. Responses were anonymous.

“We believe that happy employees result in happy customers,” said President and Chief Operating Officer Cheryl Eidinger-Taylor. “We provide our agents and staff with the training they need to achieve the best results for themselves and for their customers. Everyone benefits from this approach.”

In February 2018, ERA Key merged with HUNT Real Estate ERA, the second largest brokerage firm in the ERA® network, but it maintains its separate identity.

“We merged with ERA Key because of its well-deserved reputation for being one of the top agencies in Massachusetts,” said Charles F. Hunt, executive vice president and chief operating officer, HUNT Real Estate ERA. “ERA Key is a well-run company with dedicated, hard-working agents. We’re proud of what ERA Key has accomplished and continues to achieve.”

Eidinger-Taylor said ERA Key’s approach has played a key role in the agency’s rapid growth. ERA Key now has more than 330 agents and about $740 million in annual sales.

ERA Key Realty Services announced that its Billerica office, 328 Boston Road, will serve as a drop-off center for Toys for Tots through Friday, Dec. 13, 2019.

Anyone who would like to donate toys in unopened boxes can place them in the collection box at ERA Key anytime between 9 a.m. and 4 p.m. ERA Key will coordinate the collection and distribution of toys through the Marine Toys for Tots Foundation’s local coordinator.

“ERA Key’s Billerica office has been collecting toys for the Toys for Tots campaign for three years,” said Realtor Cathy Lomasney, who has volunteered for more than 10 years and coordinated efforts for the Billerica office. “Over that time, we have collected thousands of toys, games, puzzles and stuffed animals, in addition to cash donations.”

Toys for Tots, which is operated by the U.S. Marine Corps Reserve, has donated more than 500 million toys to economically disadvantaged children at Christmas since it was created in 1947.

What Tips Do You Have for First-Time Homebuyers?

The following tips for first-time homebuyers from ERA Key President Cheryl Eidinger-Taylor appeared on “Finding the Uncommon Deal,” a new website for homebuyers.

Make sure you know the process. Review the home-buying process, timing of a purchase, funds that will be needed and the current market circumstances (i.e., is it a seller’s market or a buyer’s market? Are short sales or foreclosures available, etc.). By knowing the process before looking at homes, the buyer will be prepared to make a quick decision, which is especially important today, as inventory is limited.

Buyers should be pre-approved for a mortgage and should know how much they can afford to spend.

Be prepared to act quickly. Today’s market is a seller’s market. Inventory is low and we are seeing bidding wars, where the seller ends up selling for a higher price than the initial listing price. Agents and homebuyers should be available as quickly as possible, so they can act quickly. Buyers should be prepared to lose a few before they purchase the home they truly want.

Buyers need to know that they can’t wait around in conditions like these. If you’re serious about buying a home, you and your agent should be prepared to view the home as soon as possible and to submit an offer quickly.