Walking in Their Shoes: A Venezuelan Expat’s Humanitarian Feat 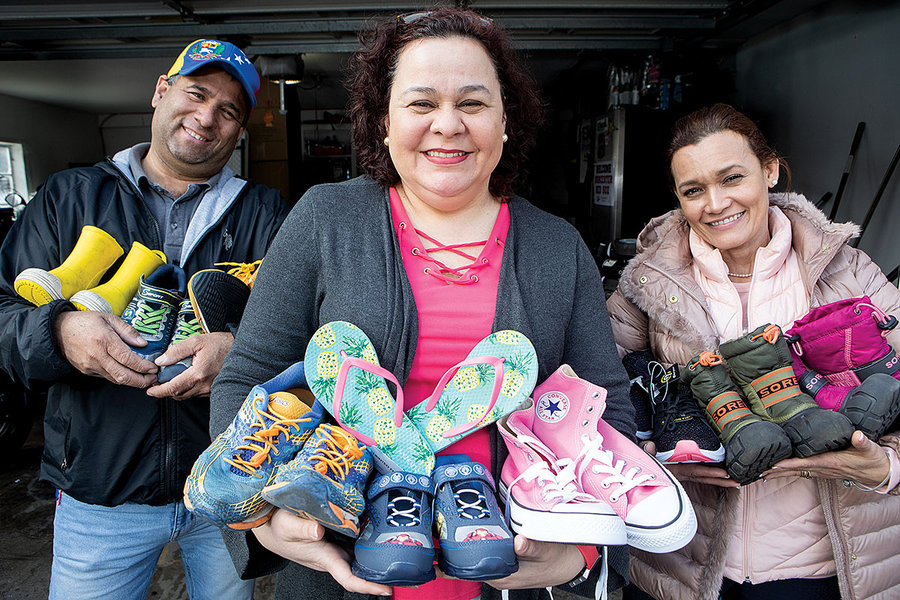 This article appeared in The Christian Science Monitor on April 4, 2019.

What can a former citizen do from afar for others trapped in a troubled homeland? In this case, organize an effort to meet a basic human need.

FRAMINGHAM, MASS. – Norman Canaie noticed that some of his students at a public high school in Caracas, Venezuela, came barefoot – if they came at all. So last year, Mr. Canaie handed out armloads of donated shoes to his pupils most in need. He made sure to save a pair of white Nikes for a student who had dropped out, ashamed of his tattered sneakers.

The new pair brought the student back to class.

“The children were overwhelmed with the shoes,” says the English teacher in a phone interview. “They’re always asking me if there are more shoes coming.”

Martha Convers arranged the shoes’ 2,000-plus-mile journey from suburban Framingham. Besides working as a real estate agent and Zumba instructor, she has a special side gig: Shoes for Venezuela.

Since moving from Venezuela to the United States in 2004, Ms. Convers has watched her country devolve into political chaos. But she repurposed her despair. She started the volunteer donation campaign in November 2017 and estimates she’s shipped at least 3,000 pairs of shoes to the country. Recipients include schools, nursing homes, churches, and nonprofits. With food and other necessities scarce, receiving a pair of shoes can seem like a luxury, Ms. Convers says.

Venezuela’s contested president, Nicolás Maduro, continues to crack down on international aid. This has heightened a standoff between Mr. Maduro and legislative leader Juan Guaidó, the self-declared acting head of state. As the relentless political crisis fails to address staggering poverty, inflation, and shortages of vital items like food and medical supplies, grassroots efforts from the diaspora like Ms. Convers’ are sprouting up. They help remind Venezuelans they are not forgotten.

“At this point, I don’t think this is a political matter,” Ms. Convers says. “It’s a humanitarian matter.”

Venezuela boasts the world’s largest oil reserves. But experts say chronic political corruption and economic mismanagement have choked the country’s prosperity, as have U.S.-enforced sanctions more recently. Food and medicine are scarce while crime is rampant. When Mr. Canaie, the teacher from Caracas, buys groceries, he camouflages his purchase in a second bag so others aren’t tempted to steal. Nearly 9 out of 10 Venezuelans live in poverty.

It’s not uncommon for a pair of sneakers to cost more than Mr. Canaie’s monthly salary. Inflation has hit 1 million percent in Venezuela’s free-falling economy.

These turbulent conditions have meant an exodus of 3 million Venezuelans since 2015, the largest in Latin America’s recent history. For some time the diaspora has sent money and necessities to family members. In 2018 Venezuelans abroad remitted $2 billion, which amounted to 1 percent of the country’s gross domestic product.

Even though personal shipments are precarious, sometimes it’s the best option.

“People prefer to send stuff rather than money, because the value of the currency changes on a regular basis,” says Manuel Orozco, director of the migration, remittances, and development program at the nonprofit Inter-American Dialogue in Washington.

Shannon O’Neil, senior fellow for Latin America studies at the Council on Foreign Relations, expects personal shipments to increase if the political stalemate leaves Mr. Maduro in power. “And they benefit the regime – helping feed and maintain those that remain and lining the pockets of customs and other officials that let it pass through,” she writes in an email.

Mr. Maduro has denied that a humanitarian crisis exists. He has also refused international aid, though his stance appears to be shifting after a recent meeting with top Red Cross representatives. Mr. Maduro tweeted April 9 about Venezuela's readiness "to establish cooperation mechanisms for international assistance and support."

In February, a showdown at the Venezuela-Colombia border over stockpiled U.S. aid descended into violence. (Relief operations such as the International Committee of the Red Cross refused to engage, warning against politicizing aid.) Ms. Convers hopes to direct her next shipment to Venezuelans who routinely cross the border into Colombia for work.

The Monitor spoke with some nonprofits shipping goods into Venezuela that do not mark their boxes as aid.

Complications with international aid in recent weeks prompted some nonprofits like Giving Children Hope to alter the frequency and routes of their shipments. One of the charity’s Venezuelan contacts who coordinates the donations faces threats, Mr. Lawrence says.

On a recent afternoon at her Framingham real estate office, Ms. Convers still sports her silver Nikes from a morning Zumba class. She’ll teach another session later – after a quick wardrobe change and back-to-back meetings.

Her focus narrows to her smartphone screen as she scrolls through videos. Unsettling scenes of Venezuela emerge six days into the country’s worst blackout. Her thoughts race to family there. The power outage upsets her chance for updates via WhatsApp.

“You wonder for them.... It’s not only me; it’s my friends. All my friends here are concerned with their families, especially since we cannot communicate,” she says.

“ ‘Why are you throwing tear gas to us if we’re just protesting? We’re still in a democracy,’ ” she confronted a policeman at a 2003 protest. She still recalls the smell and the burn.

On two occasions, she says, thieves put a gun to her 6-year-old daughter’s head. They demanded cellphones and wallets. Her husband accepted a job offer in the U.S. soon afterward.

Ms. Convers assumed an organizer role within the Massachusetts diaspora in July 2017, when she helped get out the vote for an opposition-led referendum. Her ERA Key Realty Services office let her use the space for ballot casting. The agency continues to support her efforts and houses a shoe collection box.

Mr. Canaie, who knew Ms. Convers from church, told her his students weren’t coming to class because they didn’t have shoes. She was also aware that scores of Venezuelans made rugged treks to neighboring countries for work. When Ms. Convers made a call for shoe donations, 200 poured in within a month. She has since overseen four shipments of gently used sandals, sneakers, slip-ons, and more in a range of sizes.

She gently deflects the credit.

“I just think that I am a tool for God to be used on this,” she says. “What can I say – I have a wonderful team of volunteers.”

The boxes are packed by volunteers in Massachusetts, many of whom still have family affected by the crisis. Volunteer Rita Álvarez has offered up space in her garage for shoe storage.

Some of Shoes for Venezuela’s fundraising comes from Ms. Convers’ Zumbathons, where money collected at the dance sessions is put toward shipments. Her latest Zumbathon, in January, drew a crowd of 200. The haul from the fundraiser launched a shipment of about 1,500 pairs soon after.

Another helper drives the shoes down to Miami. Arranged by a courier service, the boxes are loaded onto a boat headed for a Venezuelan port city.

Ms. Convers admits that starting Shoes for Venezuela brought a steep learning curve. Sometimes requests for shoes over social media are overwhelming. Given that she’s operating on a volunteer basis with limited resources, she says there’s just so much she can do. She plans to register her initiative as a nonprofit.

Ms. Convers loves receiving photos confirming the boxes’ final destinations, even if not every destination responds. Regardless of whether the shipments become increasingly uncertain under the current regime, she says she won’t stop.

“We have to believe in God and have faith.”